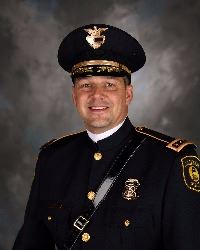 Elmer Hitt was born and raised in Jackson. He began his career at the Jackson Police Department in 1996 as a Police cadet. He served in that capacity until 1997 when he graduated from the Lansing Community College Police Academy and was promoted to Police Officer. As an officer, he worked various shifts and served as a Resident Officer for 2 years.

Promoted to Sergeant in 2005, he primarily worked the afternoon shift as a patrol supervisor and worked as the Administrative Sergeant, which was responsible for recruiting, policies and procedures, internal affairs, and grant writing.

Director Hitt completed the Jackson Community Leadership Academy in 2008 and Michigan State University’s School of Police Staff and Command in 2008. He is also a Jackson Police Department Ethics Trainer and was selected as Officer of the Year in 2005.